Created 26-Aug-18
When Shira and her parents were planning her Bat Mitzvah, they didn't want it to be about a big party and, as an aside, a token mitzvah or side project. They also couldn't stand the idea of spending so much money on a party that would be over in a few hours...without making any lasting impact.
So, they decided to calculate what the cost of a standard bat mitzvah was - including catering, music, hall, photographer, etc. - and to see if they could find ways of doing parts of it themselves for half the cost - and then take the other half of the budget and give it to tzedakah.
They included Shira in all the planning, budgeting, cost estimating, and decision making processes - exploring what was necessary, and what could be done more cheaply or simply - for example, by self catering, doing their own photography, borrowing decorations from gemachs, etc - so that more could be given to tzedakah. Every shekel saved was a shekel given!
In the end, they managed to make a beautiful Bat Mitzvah for half the original budget - and the other half of the money could be given to Lemaa'an Achai families.
The Bat Mitzvah started at the Bar Kol supermarket where all the guests were given shopping lists of what different Lemaa'an Achai families had requested to make their upcoming chagim special for them. The girls then gathered the groceries, checked out and brought the supplies over to Lema'an Achai. Instead of catering the simcha, they ended up catering Rosh Hashana for 11 families...
The family encourages anyone and everyone to do the same - you don't have to be a rich donor or have lots of extra money to make a difference - you can just chose to spend your money where it counts. 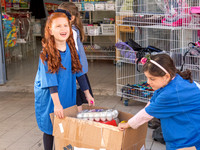 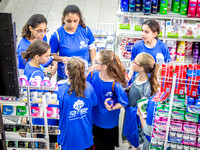 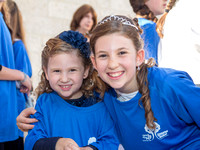