Created 10-Nov-15
The Temple Mount is situated in the Old City of Jerusalem. The Bible refers to the Temple Mount as the place where God chose the divine presence to rest (Isa 8:18), and is the site of the First and Second Holy Temples. The location is the holiest site in Judaism and is the place Jews turn towards during prayer everywhere in the world.
Photos from 22 November 2015 show an arrest of a young Jewish man for allegedly declaring "Shema Yisrael...", a father bringing his son for the first time (just in advance of his Barmitzvah), a young mother bringing her tiny baby, and timbers from the First Temple left exposed in the open.
Photos from 20th December 2015 show reflections in rainwater, extreme proximity (see leg and feet shots) of police and Wakf to Jews in group, Lebanon cedars covered in outside storage and Wakf lookout stationed high on wall to further the observation of the Jewish group.

Click a photo to see it enlarged.
Mouse over the upper left-hand corner of the enlarged photo for a drop-down menu of options. 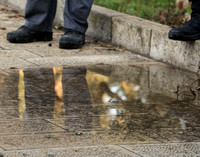