Created 21-Nov-13
The ancient city of Beit Shemesh ("house of the sun" in Hebrew) was originally named after the Canaanite sun-goddess Shemesh, who was worshipped there in antiquity. The ruins of the ancient biblical city can still be seen in the tell of Beit Shemesh, located near the modern city Beit Shemesh. It is first mentioned in the Book of Joshua 15 as a city in the territory of the tribe of Judah on the border between their territory and that of the tribe of Dan. Later in Joshua 21 Beit Shemesh is mentioned as having been set aside as a city for the priests of the tribe of Levi, the Kohanim. The city is mentioned notably in chapter 6 of the book of 1 Samuel as being the first city encountered by the Ark of the Covenant on its way back from Philistia after having been captured by the Philistines in battle. In the book of 2 Kings, Beit Shemesh is again mentioned as being the site of the battle between Amaziah king of Judea and Jehoash king of Israel.During the destruction of Judea by the Babylonians, the waterworks of Beit Shemesh were sealed and covered, and were not uncovered until 2004. Thus during the first Jewish return, known as the Second Temple period, there was no revival of the city, as opposed to many other places in the vicinity such as Beit Guvrin, Maresha, and others. On 6 December 1950, the Hartuv displaced persons camp "Ma'abarat Har-Tuv" was established on the site of the current-day Moshav Naham. The first inhabitants were Jewish Bulgarian immigrants. They were joined by more Jewish immigrants from Bulgaria, Iran, Iraq, Romania, Morocco and Kurdistan. Beit Shemesh is located approximately 30 kilometres (19 mi) west of Jerusalem (Wikipedia) 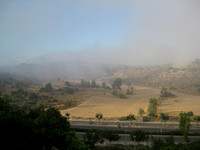