Created 16-Jun-22
Chomesh is an Israeli town organized as a community settlement in the northern Samarian hills along Route 60. In 2005, the town's homes were demolished along with three other towns in the northern Shomron, as part of the Israeli disengagement from Gaza. (I have no idea why it was necessary to demolish this town.)
Since that time, former residents and others have revisited the ruins multiple times and continue making efforts to return to the site and rebuild the town which is in the center of Biblical Israel.
On December 16, 2021, Yehudah Dimentman, a resident of nearby Shavei Shomron and a student at the Chomesh yeshiva-- was murdered by a Palestinian terrorist, who also wounded two passengers in the ambushed car.
The students of the yeshiva work and study Torah long hours under primitive conditions.

The photos were taken on a tour of the village organized by the Women in Green for the Sovereignty Movement. They depict scenes of students’ studying and dwelling activities during the summer season.
https://www.visions-israel.com/ChomeshY

To take a part in the efforts to proclaim God's name by studying His law and restoring this part of Israel's ancient homeland to Israeli citizens, you can support the Yeshiva by donating at https://givechak.co.il/Homesh . 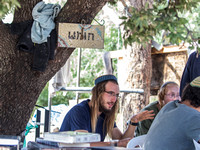