Chanukah is About Light

Created 4-Sep-20
Sometimes when we get close up, details are revealed that give depth to a picture. These shots of the Chanukah menora (nine-branched candelabrum) aim to reveal these details. Close up, we can even start to feel the character of the particular chanukiah.

Photos featured show up-close wicks burning, the simplicity of the oil containers used, and people interacting with their Hanuka lamps.
The Jewish festival of Chanukah is observed by the kindling of the lights of a unique candelabrum, the nine-branched Menorah or Chanukiah (Hanukiah)-one additional light on each night of the holiday, progressing from one to eight on the final night. In the Holy Land of Israel, the preferable location for lighting is outside, adjacent to the from door of the owner. The Chanukiah in the Holy Land is typically encased in a glass covered metal frame for protection against wind. Such Chanukiahs form the main subject of photos in this collection.
The typical Menorah consists of eight branches with an additional raised branch.
Sometimes the Chanukiah is crafted by an artisan, sometimes it is punched out of metal in a factory, and sometimes it made from the ingenuity of children from materials at hand. The preferable source of lighting fuel is olive oil, and jelly doughnuts are commonly eaten because of their ingredient of oil. 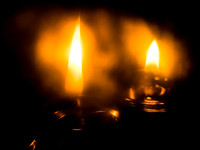 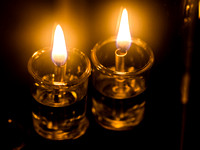